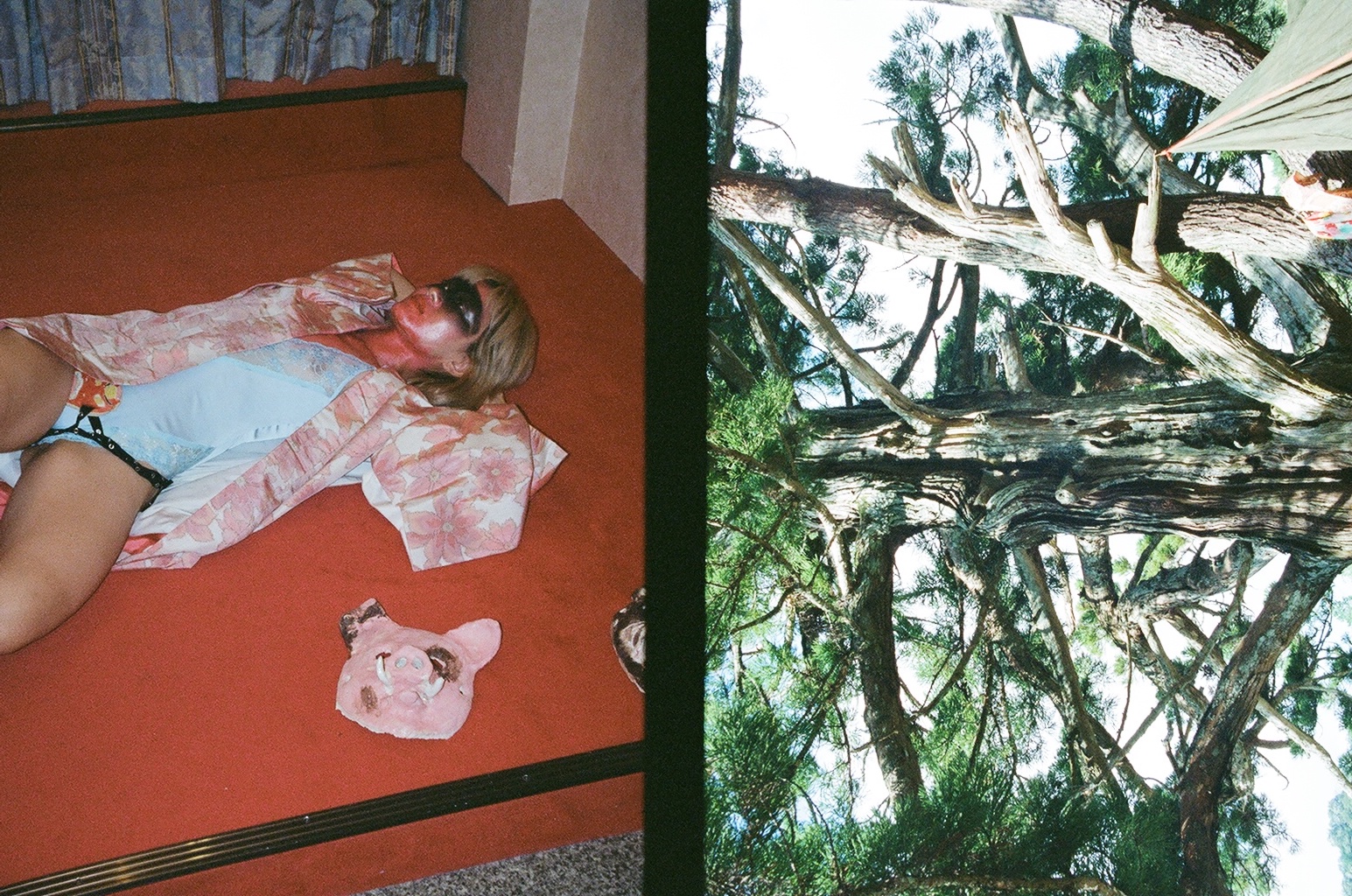 Ritsuki Fujisaki Gallery is pleased to announce a duo exhibition by ISHIBASHI Motoko and TSUCHIYA Urara, “On being an angel” from 3rd of September to 2nd of October in 2022.

Both of them are based in the UK and, in this summer, spent the same period in Artist-in-Residence located on the west side of Japan called The Shigaraki Ceramic Cultural Park which is well-known as the one of the Japanese six ancient kilns producing Shigaraki ware. 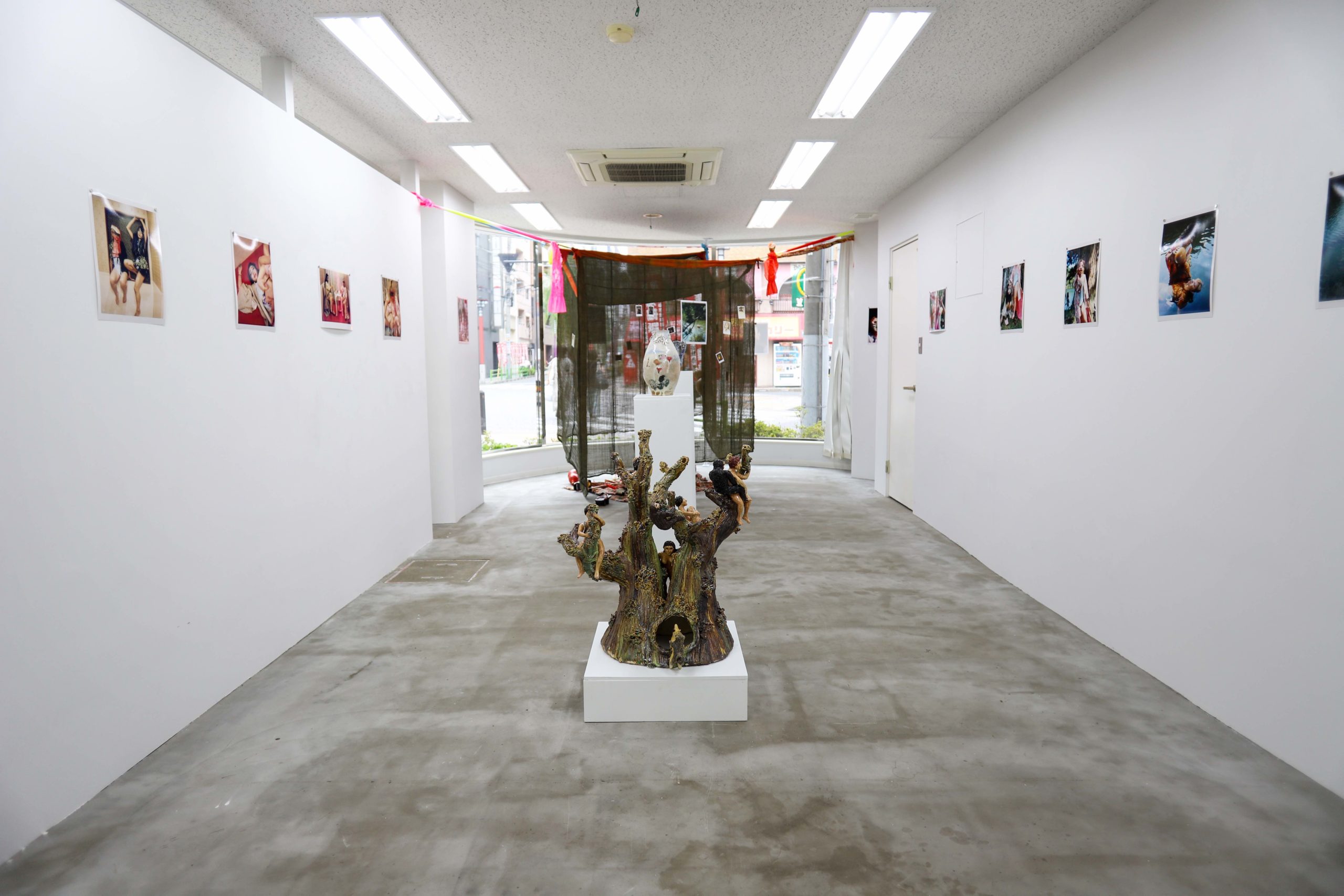 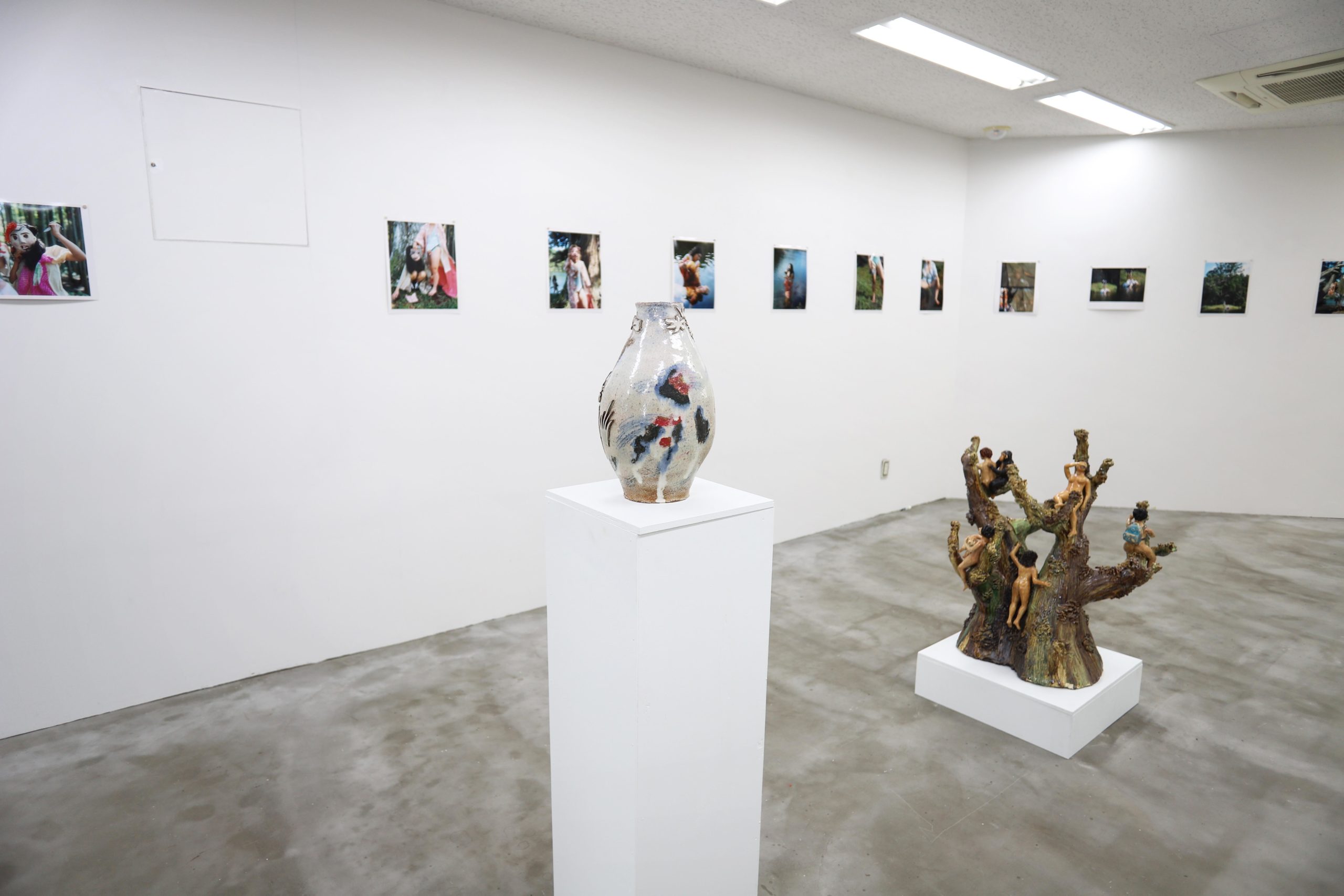 In this exhibition, a new series of ceramic and photography works which have been co-produced from several years ago.

The title of this exhibition, “On being an angel” is cited by the caption of a work which was exhibited in 1977 by Francesca Woodman (1958-1981) who is New York based photographer.

Her photography works are known for themes around gendar, sexuality and identity construction with its obscure, ambiguous and ghostly presence.

What makes this exhibition outstand is that both two artists are proposing their attitude towards this modern society as the fluctuation of social norms such as gendar and queerness increases while quoting her serieses of works.

Japanese tropes such as Yōkai, ghost stories, nature, festival masks, and mosquito nets are distributed in space along with disturbing and provocative way which are dressed by violence and humor. 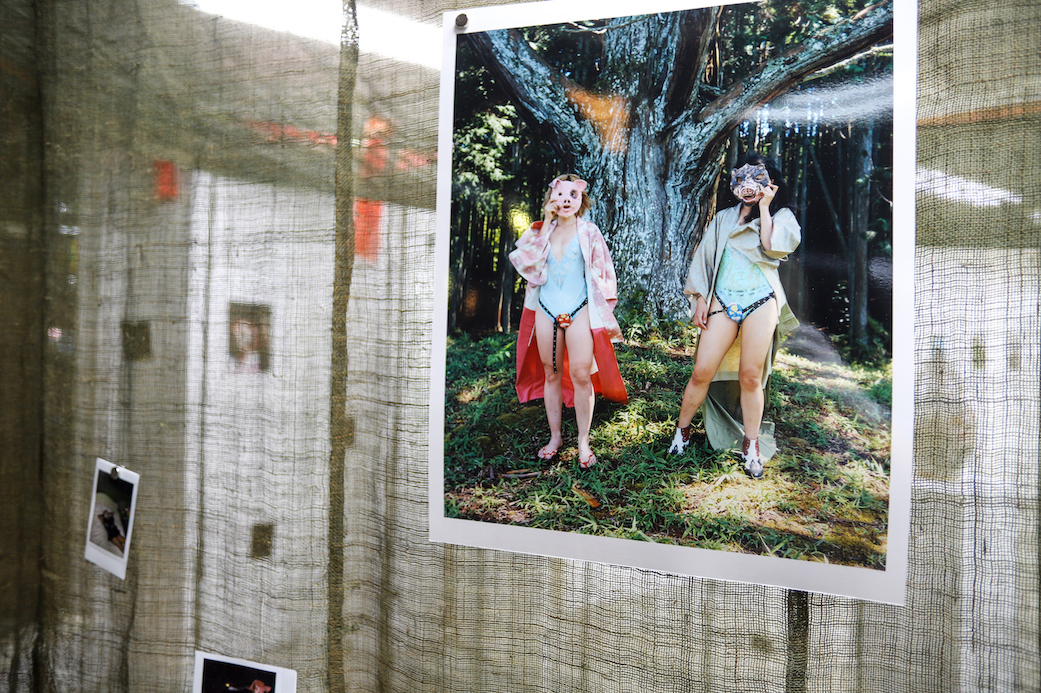 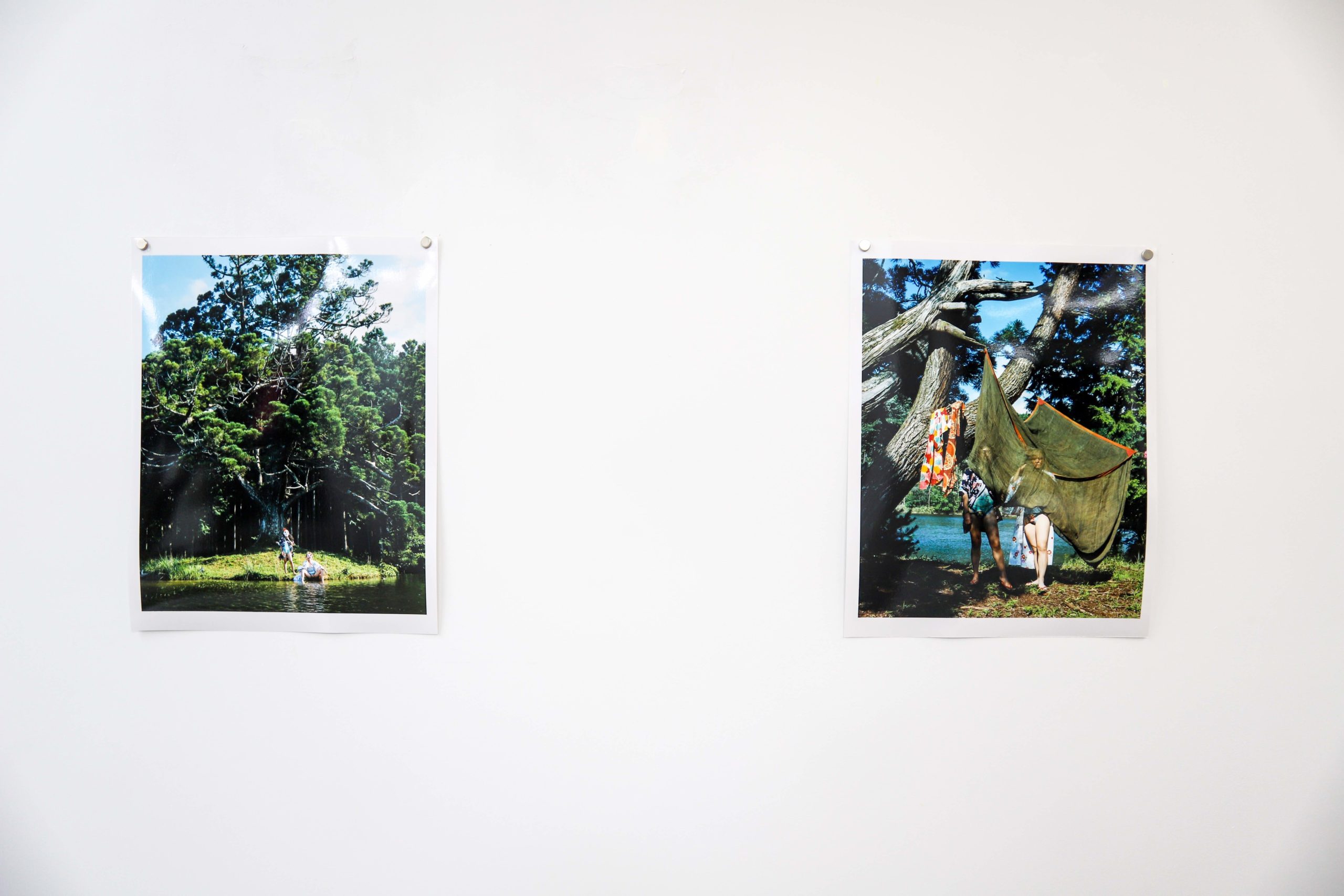 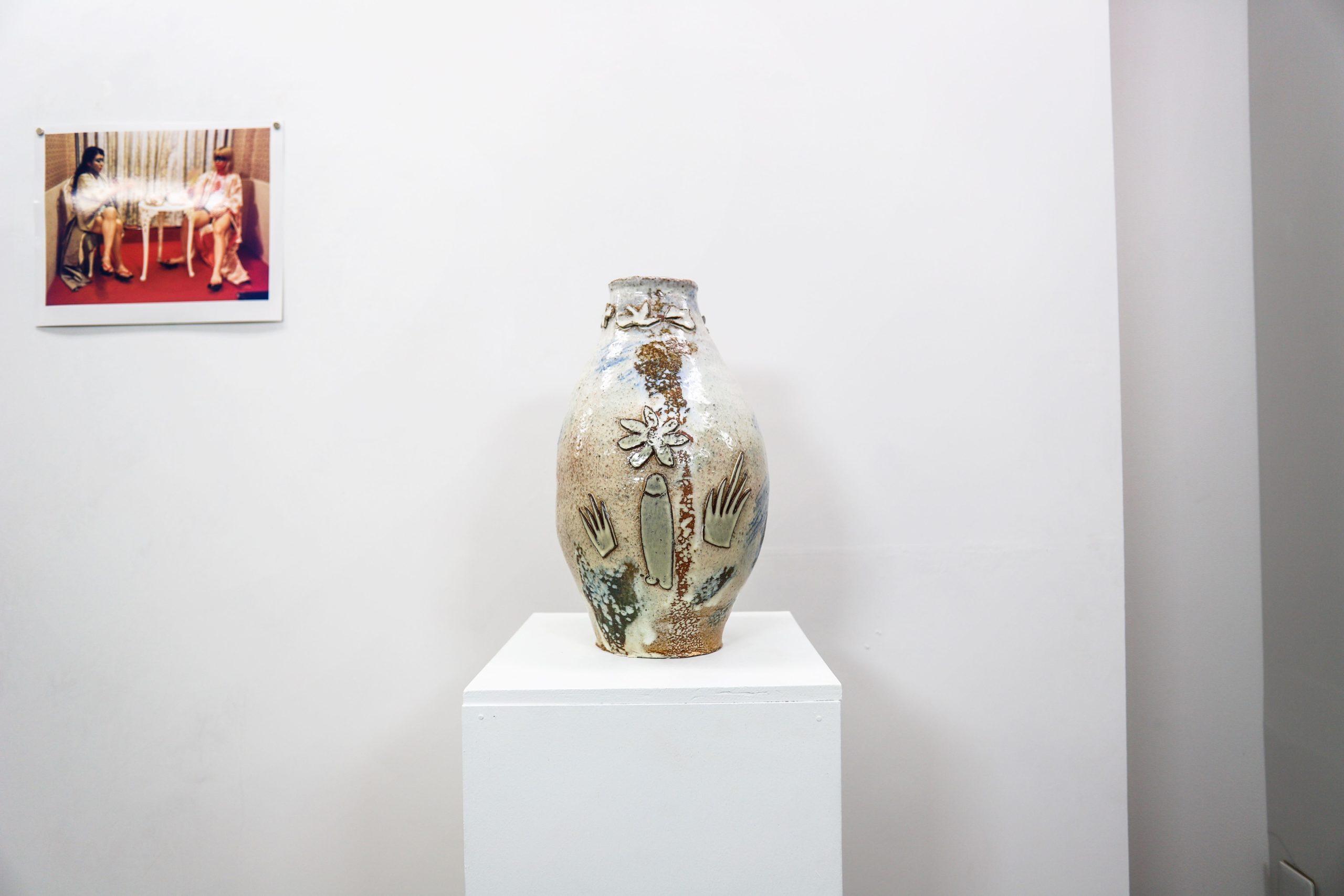 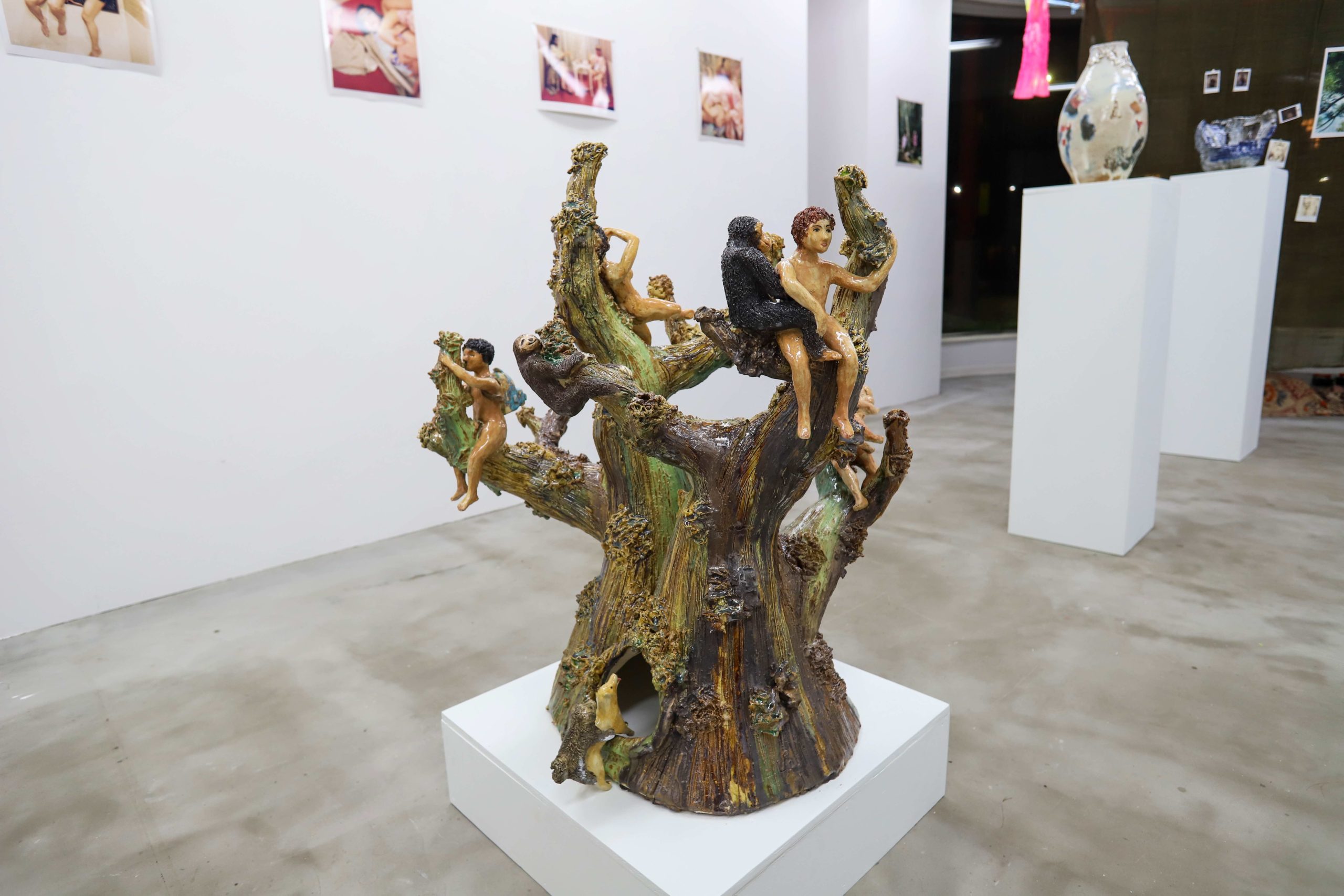 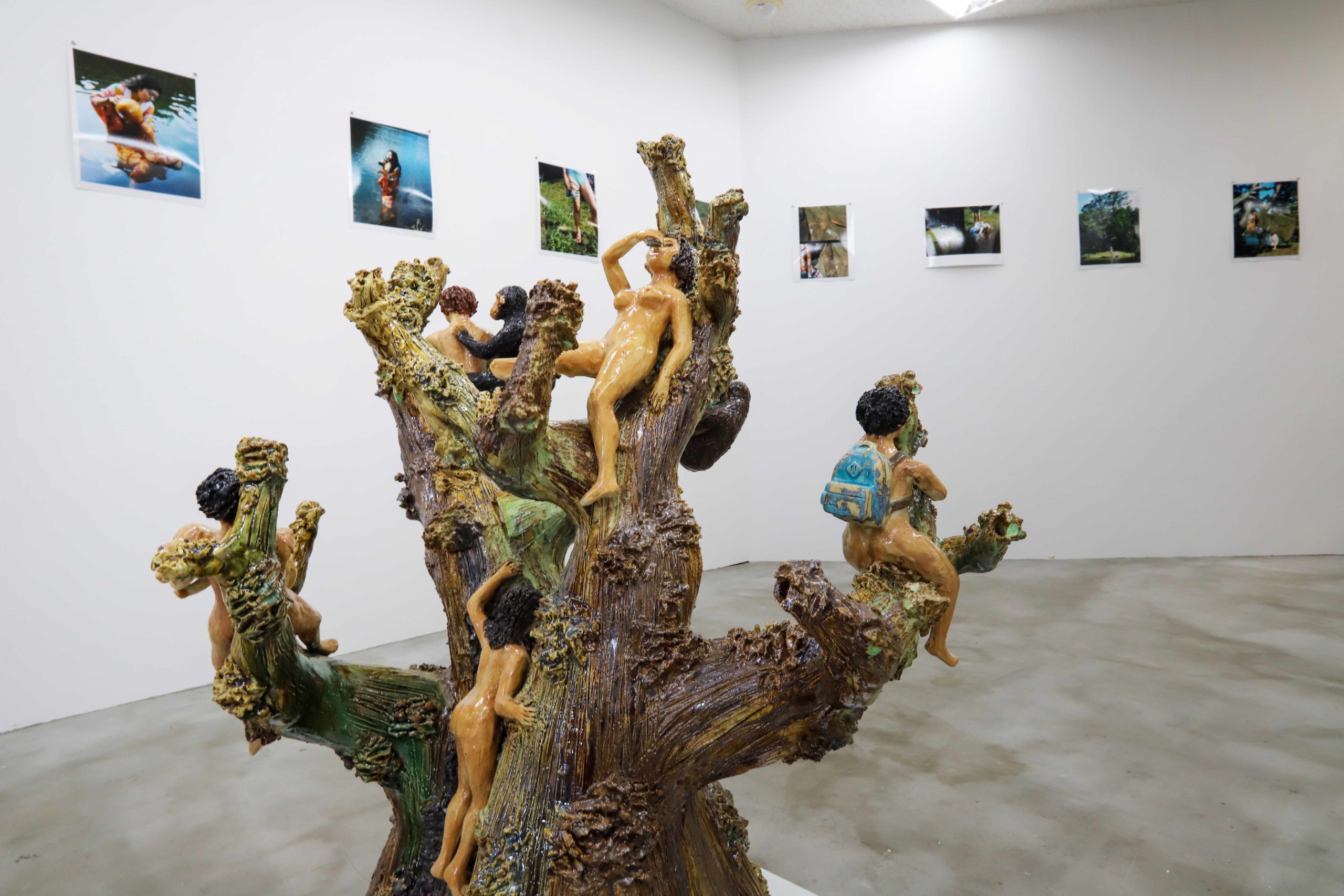 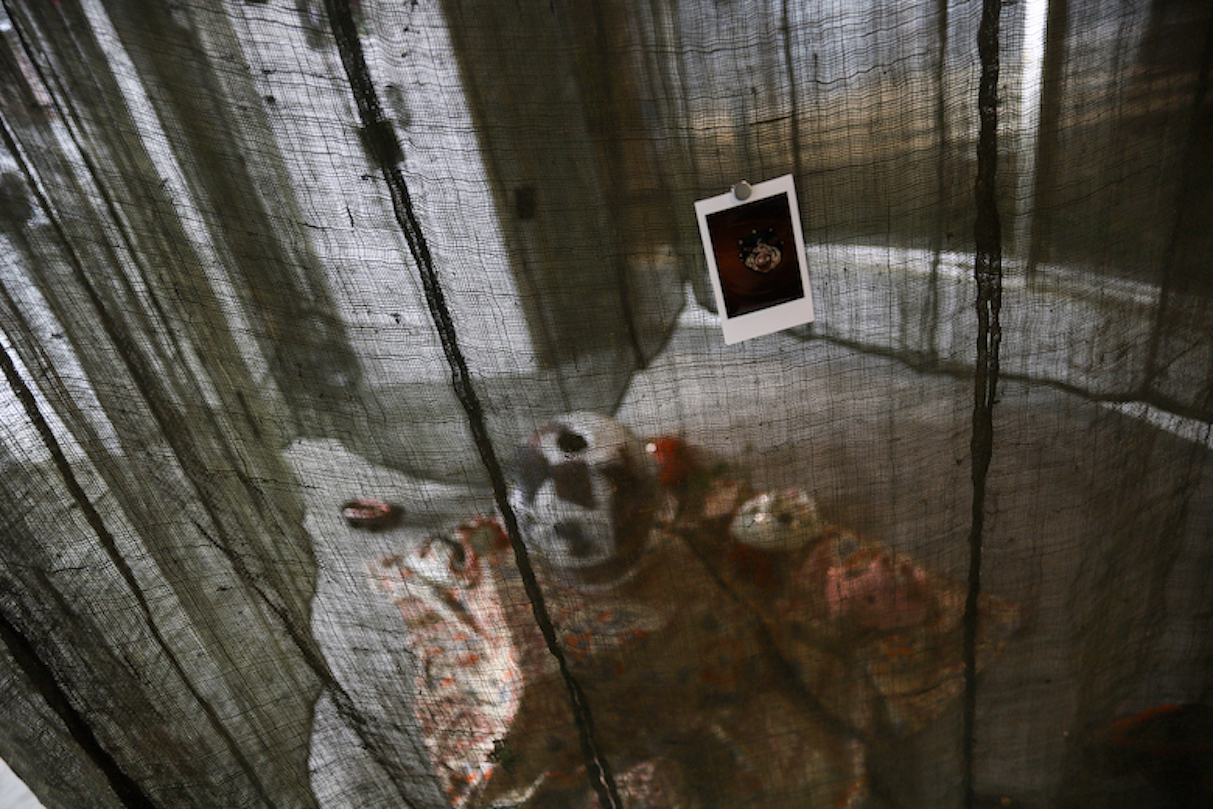 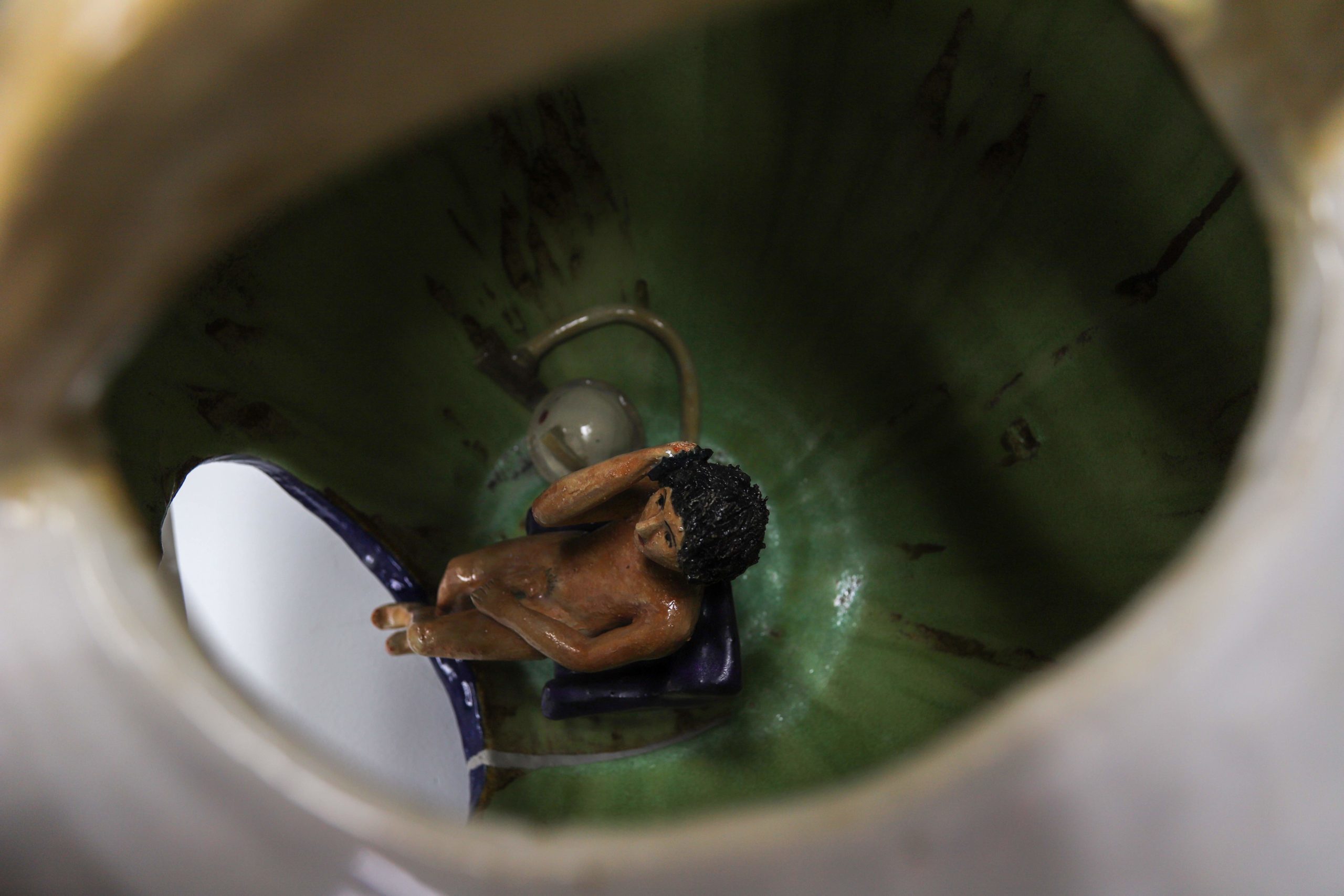 Please refer to the following links for information for both artists.

untitled, or: the ground beneath our feet

A common explanation for ghosts is the idea of a soul that’s stuck in time; repeating the same actions endlessly until it somehow finds peace. Until it’s laid to rest.

There are some stories where mankind is made from dirt or clay, from the earth itself. Lost, lingering souls becoming a part of the forest floor, or a drop in the ocean. Each time we let ourselves sink deep into the sea, or hike through the woods, the sound of the ground beneath our feet is a footfall echoing through history, disturbing some ancient and uneasy slumber.

Their faces are hidden in a net, centuries old. Time no longer an abstraction but physical, corporeal. To feel this ageing, aged net making contact with skin is to be held by history itself. Everything else that has touched it; that has pass through or lingered on.

Everything we touch is haunted. Full of traces of what came before us, our fingerprints the next in an endless, silent, conversation, as they wait – hanging up a mosquito net, crafting a mask with the face of a pig – for whoever, whatever, will come in weeks or months or years or centuries, and hold our hand print.

The net is suspended in space, but not in time. Held up by multicoloured strands of fabric pulled tight. It’s decorated with images of the woods, the sea; of masked figures emerging from, returning to the earth. One thing centuries old, the other weeks or maybe months at the most. But this is not the past meeting the present. Only the net is present; the photos are frozen pieces of the past – polaroid ghosts, reanimated when their frozen faces meet with someone else’s gaze.

It’s become an instinct to freeze ourselves in time: Take out your phone and take a picture. It will even record the date, time, location. It’s never been easier to turn yourself into a ghost.

There are a group of humans climbing on a giant tree. All of them nude, except for one who has a backpack on. There are animals at the base of the trunk, or hanging from the trees. One human has a monkey in their lap; its furry hand – so similar and alien at once – resting on their bare back. As if the animal has offered words of wisdom; understanding better than this next step in its lineage, what it means to make peace with what comes next.

There are theories that  say all of time is happening simultaneously; past, present, future all meaningless distinctions. If these theories are true, then to be human is to be haunted; everywhere brimming with the stuff of the past, ghosts who aren’t quite ghosts walking among us.

Inside a broken vase, a picture: a bare body, blurry, what looks like a snake around its neck. The image looks like its always been there; as if someone smashed it open to find the picture, not knowing if it’s a relic from the past, or something that won’t be clear for centuries to come. Everything happening all at once. The ghosts in the forest – faces obscured by masks or nets, feet resting on the water’s edge – not just captured by photography but still there among the trees.

A classic way to end a horror film on a jump scare is by having a hand emerge from the depths of the earth, or a monstrous figure reveal itself from the ocean floor.

At the end of Friday the 13th, Jason – presumed dead, his untimely demise the motivation for his mother’s murderous rampage – leaps out of the waters of Camp Crystal Lake. What was thought to be the past, something washed away with the tides, violently brings itself back into the present, and then the future. Slasher sequels playing out like ghosts, the same rhythms repeated, reanimated, with no hope of peace for the man in the mask.

Ghost stories are stuck in time. The past has never passed, and the future seems impossible to reach; lost and murky among spirits and memories. Their endings are never able to look forward, but are pulled back, a repetition of a cycle. The child of a once-haunted couple marked by the past: a scar on the left eye-brow like a wound that won’t close.

The figures in the forest wear masks, but never put them too close to their faces. They hold them at a safe, precarious distance. As if to make contact with this new face is to become it. The weight of the past, like underwater pressure, pushing down on uncertain steps towards the future. Even as the future and the past find themselves in lock-step with each other; happening in sync.

Stepping on autumn leaves makes a familiar, comforting sound. The way they crunch underfoot. Leaves that have fallen from branches countless times before. Will remerge again in spring, and fall onto the ground, crushed beneath hiking boots, again and again and again. The landscape is as much of a ghost as the figures that linger on its edges, in that uncertain space between. The ground beneath our feet echoes through time, leading back to us. Back to clay and dust. Where we are, will be, have been.