Kazuma Yamamoto is a contemporary artist born in Tokyo in 1998. What has been attracted to Yamamoto is meme, video content, and especially horror movies, which are given malice and aggression in the process of repeating the duplication in internet. It appears as “eeriness”, “creepiness” and “uncomfortable” towards us.

Yamamoto’s work coexists with sadism and loveliness with disquiet atmosphere. Yamamoto’s style, which cannot easily understand the meaning of images drawn, is under effect of Transavangarde movement, for instance, painters called “3C”, including Sandro Kia, and German neo -expressionism movement such as works by Jigmar Polke.

It is also a feature of Yamamoto’s works that simultaneously holds moony images, rough strokes like kid’s doodle, and realism from Northern Renaissance. Apart from the unreality of motifs and poor touches that are intentionally introduced, realistic aspects lies chillingly.

“Banned Toys” are toys which are considered as harmful to user’s body, and are prohibited from selling and also even owning.

By referring to “Toy Story” and “Odoradec” from “Die Sorge des Hausvaters” by Franz Kafka (1917), Yamamoto allures us towards prohibited existence by harmfulness.

Various harmful toys that were denied in the process of being familiar in a safe and rational social life, are not allowed to have them, and are destined to be forgotten in one corner of history.

The appearance is engraved with the sadness of human “play” inevitably causing the danger of damaging someone, and that it will be commercialized without noticing it. Nevertheless, from the package and the image of the advertising, you can clearly read the original innocent intention to having children play happily.

This innocent brightness reverses the meaning of consumers, unexpectedly, and fragile, as if the malicious traps were awaiting their prey.

Products that have been banned from manufacturing and distribution as a harmful toy are pathetic, created by human ego and are considered contraindicated by human weakness.

However, harmful toys drawn in Yamamoto’s work do not invite mercy and ask for sympathy, but to enjoy the existence of its own in a unique eerie world by Yamamoto’s paints.

Its brightness and cheerfulness may actually hurt the body of the children playing with it and adversely affect growth. These concerns about the perpetence and adverse effects are not actually limited to harmful toys.

Children who are positioned as being protected from the perpetence and adverse effects have also cruel aspects.

Adults who protect children from perpetrating and adverse effects can also hurt and ruin the weak. 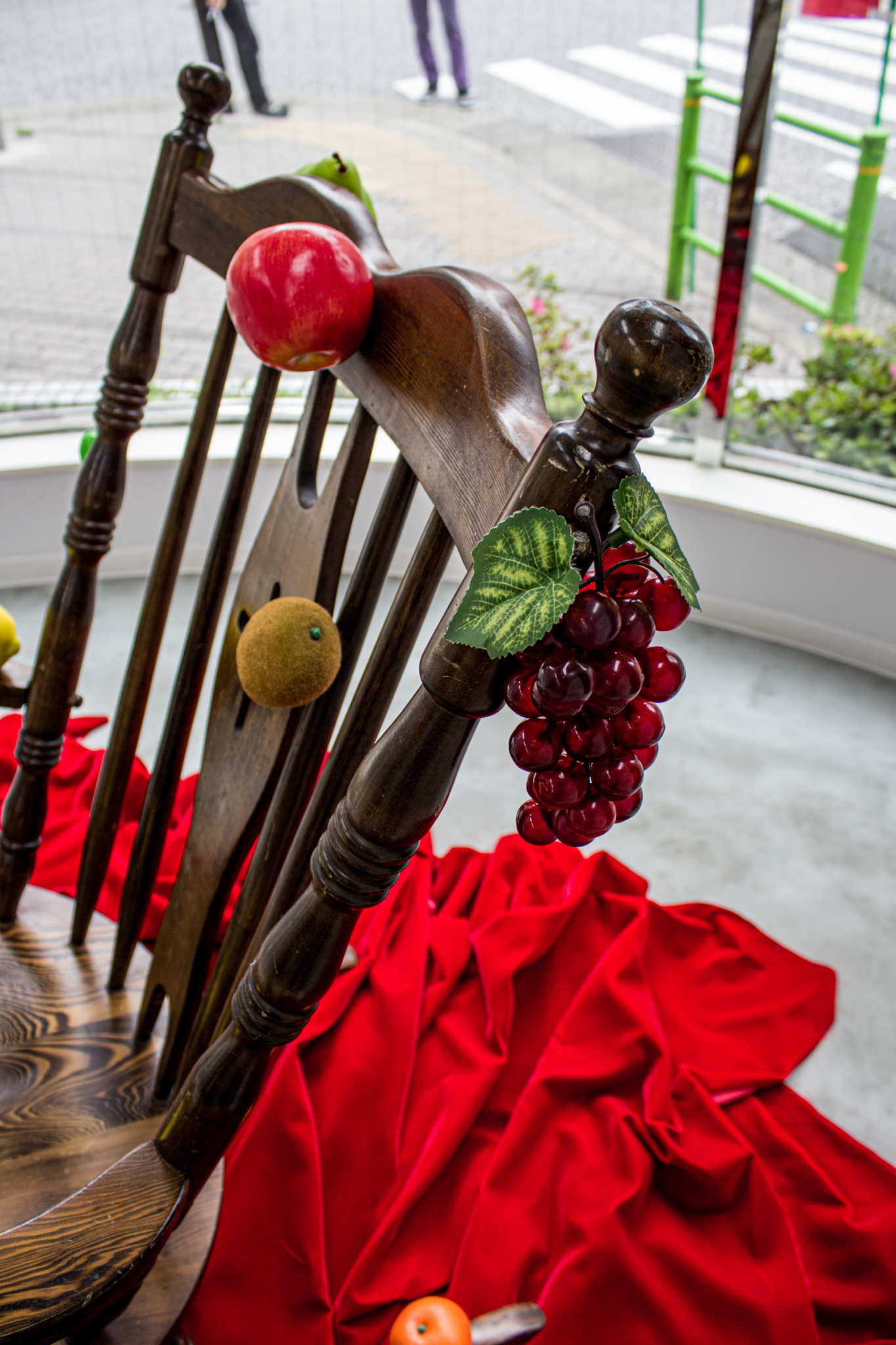 Wooden rocking chairs, being laid in center, have a rich sign of the modern lifestyle, along with the nostalgia. The countless colorful model “fruits” attached to the swaying chair have no freshness and pampered flavors, and they are thoroughly clinged to the chair with a frightening and inorganic presence.

The disturbance of Yamamoto’s work may be derived from making the boarder between viewer’s innocence and sadism ambiguous.